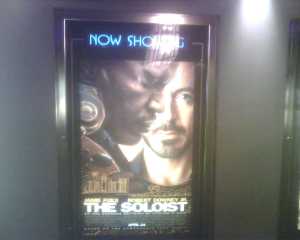 I thoroughly loved this film. Speaking from personal experiences and the many intimate relationships that I have had with people with schizophrenia, I would like to say this film is a beautiful portrayal of the disease. The relationship of Robert Downey Jr (as Steve Lopez) and Jamie Foxx (who plays our star Nathaniel Anthony Ayers wonderfully.) is that of a labor intensive Laurel and Hardy. The story sometimes plays like a love story of a platonic nature. To quote the film once: “Your gay boyfriend is here”. The special relationship that was created on Skid Row between a LA Times reporter named Steve Lopez and a long forgotten musician by the name of Nathaniel Anthony Ayers is of a family nature.

The two performances are a perfect balance and I do hope that these actors work together again. I personally hope for an Oscar nod for Robert Downey Jr, as this is the best I have seen him since his role as Charlie Chaplin in “Chaplin” in 1992. The film goes as deep as possible in showing the vast intricacies and demons that plague so many schizophrenics on a daily basis.

Most people that don’t like the film don’t like that the secondary story is the relationship between the two. The reason those people/critics don’t get it is quite simply they don’t understand that this film is about understanding the crippling loneness that schizophrenia creates in this world and in individual lives. They just didn’t get the fact that the relationship is second to the illness. This film isn’t about beating anything or miracles but more about an illness and how it’s crippling affects can manifest itself in people’s lives. Sometimes a miracle can come in the form of another person giving a crap about another person as well. The illness of schizophrenia isn’t always so easy to stomach or to get, but if you walk into the theater with an open mind and heart something might happen; something great.

I will leave you all with this thought: Miracles are overrated anyways. There is no need to see Jesus in your morning toast to change things…just go be the change you want to see in the world.

Here is the real story for those interested:
http://en.wikipedia.org/wiki/Nathaniel_Ayers

Note that I didn’t even mention how they skated over how the homeless in La are treated. To make it a political film would have lost the main heart of the film.