What is good old Sammy Malone / George Christopher up to? Saving the seas for over 20years….

I saw Mr. Danson speak last night about how he has been battling for the safety of our oceans for the last two and half decades. Now that’s serious dedication! Not some phony PR scheme but real love for our world’s oceans. I have to say I feel the same way even if I didn’t start a foundation. He explained the Oceana’s purpose in lay persons terms and how we can help.

Here are a few simple facts I will reiterate:

For every one pound of ‘factory farmed fish’ sold it takes 3 to 6 pounds of wild fish to be caught, say in Chile. The leftovers are wasted and thrown away.

There was also something called ‘bottom trawling’ (basically scraping the bottom of the ocean for ‘free fish’) which destroys the entire sea floor including coral and fish nurseries. It’s a common practice in poorer counties that exchange their fishing waters or ‘let certain countries and corporations fish for free’ in exchange for basic medical aid, paved roads and the financial support they desperately need. Very much like how the ‘United Fruit corporation’ (which is now Chiquita brands) exploited the 3rd world farmers of Latin America and Central America back in the early 50s through the 1970s. This is my comparison and I am referring to this long forgotten story of the past: http://en.wikipedia.org/wiki/United_Fruit_Company

He also explained something called Ocean acidity which is pretty hard to explain but it kills fish as well by making their environment unlivable. The acidity levels were brought up to 30% due to industrial revolution in other words the oceans a forced to process out smog and CO2.

Most Countries follow very minimal guidelines to prevent ‘overfishing’ of the 10% percent of fish left from the 90% of fish that populated the sea when he was a kid in the 1950s. That’s a 90% reduction in fish populations which in fact effects the populations of smaller sea creature ecosystems. Even the shark population is in serious danger partially due to something called ‘shark fin soup’ widely poplar in Asian countries. Sharks are often stripped of it’s fins and left to die bleeding out in the water.

Mr. Danson also briefly mentioned that widespread piracy near the African/Somalian seas has deterred large fishing corporations from exploiting the waters, which has helped the smaller, traditional fishermen of north Africa. These generational fisherman have been able to fish again in waters after years of them trying to fish in what most call a vastly empty sea. It just took a few years of leaving the seas alone for the fish to naturally come back.

The most brilliant thing about his book is that it explains what’s wrong and how everyday people can help the situation; like if you or I are out at a restaurant and want to order some fish to eat, ask if it is factory farmed fish. Unless its wild, order something else.

The website is :  http://na.oceana.org/ which explains the cause in better details.

This site is where to get his book: http://www.oceanabook.com/uof/oceanabook/?keycode=158926 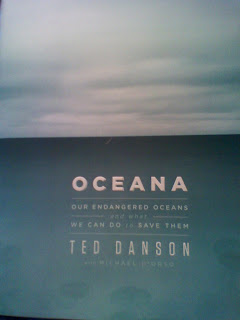