Last night I saw David Mamet’s “American Buffalo” at The Geffen Playhouse. “Buffalo” was written in 1975 and you can tell. There are no stupid references to cellphones, email or anything else so modern. It’s now considered a classic, and I can see why-it’s just plain raw.

The Geffen Playhouse in Westwood is often full of the sophisticated, overtly upper middle class crowd. Some of theses ‘sophisticates’ left at intermission. I can only assume because the play was so raw, rough and rather foul mouthed. It also had this sad kind of quality that only Mamet and or a Chicago/city upbringing can produce.

Maybe this crowd of people who left weren’t so used to seeing the direct dreams of the everyday, not-so-intelligent, average Joe’s tragic future? I’m not sure, but I thought it was interesting and down right funny when these eggheads left. You can tell sometimes, when some people just want to ignore other classes while others want to help. Or maybe I’m wrong, maybe they felt too guilty, watching these people decay on stage?

I would assume if it is Mamet, you’re going to have a bit of language, directness and maybe (if your cast is only three men) you might have some woman bashing and or macho (70s style) over compensation. After all it’s god-damned Mamet. He recently described this play as a story about the, “thieves, con-men and junkies,” he grew up with.

It was directed by Randall Arney, who did a great job. He recently directed “Superior Donuts” (Also at the Geffen last year? 2011?) which I was big fan of. In a nut shell (without being a spoiler), it’s a story about: three petty criminals that all hang around this one, run down, wildly decorated/deteriorating thrift shop.

The minimalist cast was excellent and consisted of the following:

Bill Smitrovich (I have enjoyed his acting since the 80s ala “Miami Vice”) as the old man Don. A sublime character with much brewing below the surface.

Freddy Rodriguez as Bob. Freddy was channeling some sort of 70’s version of Brando in “On the Waterfront.”

Ron Eldard as Walter “Teach” Cole. Ron just kicked some major ass as my favorite maladjusted, Iraq war veteran, junkie, bad guy on FX’s “Justified.” His character held this inner rage that could have made Jake Lamotta feel a young girl going to her first prom. He stole show on many levels.

I took a picture of a recent interview with David Mamet about his play. I found it to be hilarious as it’s just like David in his plays: at times unexplainable, memorable and like real life-tough, tragic and without justification.

(Please excuse my typos today as I am having some health problems. So, I’m having surgery in a few days on my head/sinus/other stuff. This dam medication does not help my writing/thought process. And truthfully, I barely made it through the play without getting sick…)

Here’s to feeling better in the future & Have a nice weekend. 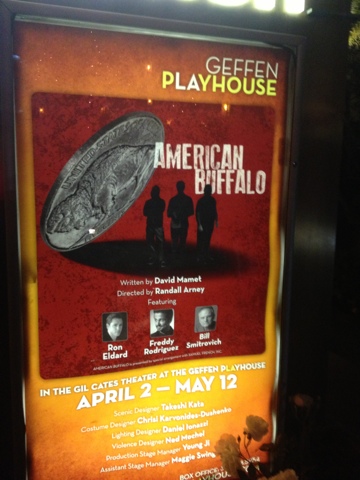 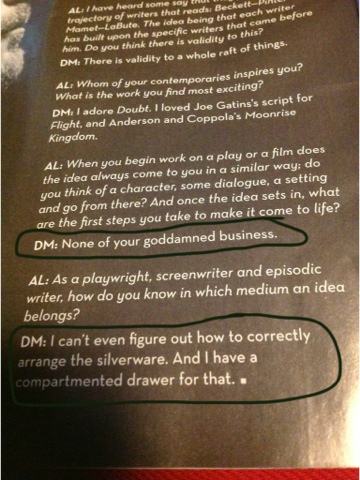