Why do I love Scandinavian Film? Because,they are just better thinkers.

I just finished spending inordinately large amounts of time with Scandinavian people. Was I travelling? No. Was I at a Swedish massage Spa? Nope. I was at my favorite LA film festival, the 11th annual Scandinavian Film festival.

Before I get into what I saw and why it was so good, I will explain why Scan Films are better than American films or most other countries. It’s all about the people as whole and the people behind the story. The Swedes, Norwegians, and the Icelandic all have a few things in common that we lack-openness and diversity of thought. To delve a bit deeper, we as Americans think in terms of revenge, solving the crime and so forth in movies. They think in terms of: why was the crime committed and how can we help those that are left behind?

Still not clear? Okay my first and most clear example is the first film I saw at the festival, called,” The Accident”. The film was about a very successful car salesman who is accused of running over a small boy and then fleeing the scene. The crime was committed in car that he had just sold. In this Norwegian delight of a story, the focus is mainly on the mystery that is human nature of man as a whole, not so much the actual answer to who ran over the little boy. Our main hero/antihero was brilliantly played by Rune Temte’, and his character explores how and why a life was destroyed, even though he thinks he knows he didn’t do it. He becomes obsessed with the victim. Things fall apart as they come together.

If this film had been made by Americans, Mel Gibson would have starred in it and he would be out there killing who ever ‘murdered his little boy’. There would be no contemplation or deeper study of any of it. (Generally, not all American film makers think like this.) Scandinavian films are better, I feel, because they think beyond the normal realm of thought.

Here’s the trailer for: “The Accident” aka “Ulykken”

The second film I saw was Swedish and phenomenally funny. It was called “A Swedish Midsummer Sex Comedy”. The term Midsummer refers to a celebration of Summer Solstice and means a European midsummer-related holiday tradition, and celebrations which are pre-Christian in origin. Around June 24th it takes place.

It basically like a hip, European version of the 4th of July. The story is about a group of late 20s early 30s friends who all get together for the Midsummer for an island getaway.
Also included in the Scandinavian crowd is one American friend and former childhood exchange student and pal from America by the name of Sam, hilariously played by one Luke Perry. Perry was a brilliant casting choice to play such an easy going personality. I don’t want to give too much away.

The third film I saw, and the most impressive of all of them, was Norway’s “Max Manus”. It is a flawless biopic about the famed anti-Nazi terrorist by the name of Max Manus. Max’s life on the big screen is one of the most impressive lives I have ever read about and or seen on film. This film was under Oscar consideration but was just eliminated from the second round of Oscar choices/semi finalists and it’s a real shame. To me it is the best foreign film for 2009/2010 year. The lead for this film, Aksel Hennie (as Max Manus) was incredible. As a matter of fact the entire cast should be mentioned as they were all so very great:

This entire trip of a film is full of intensely smart and clever dialogue, intrigue, amazing tension building scenes, and heartbreakingly spirited actions.

That’s all I have to say. Go see any of these films…or go rent some old Ingmar Bergman films. You will always be impressed, and possibly unlearn some clichés in the film world and in life. 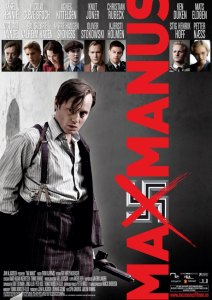