I’m reposting this essay on sexism and women in politics from the 538 blog because, yes we do live in a sexist society/backwards country:

For me, when I think of women in politics, I don’t just think of Hillary Clinton as most people do, I think of my father; (for whom was a Connecticut politician) and his old boss former governor of Connecticut Ella T Grasso.

Governor Grasso was the first woman ever elected to become governor of any US state without having been married to a former governor. I only know this because she was a close friend of my father’s as they worked together at the state capital building in Hartford or as I used to call it as a kid ‘that gold domed place.’

Unfortunately for her, Ella died while in office due to Ovarian Cancer.

She said this in the late 70s about what she thought of having a female POTUS in the White House:

“I would not be President because I do not aspire to be President. But l’m sure that a woman will be President. When? I don’t know. It depends. I don’t think the woods are full of candidates today.”

Now Grasso wasn’t super liberal and was even kind of well; right leaning (she was very anti-abortion rights), but I suppose when it came to certain topics, maybe she might have thought to herself:

“Maybe I should I appear to be conservative when it comes to women’s and or social issues, as it might get more male votes…and or show my persona as still bowing to male supremacy?”

Mind you, this is just me projecting my own rhetoric onto the former gov, but often when I think about what any political candidates have to do i.e. actual politicking to get votes-it makes me angry, then sad and then sick.

And yet despite all of that, I’d still like to think that Ella Grasso would be proud any of these women that have run for the national office of the President from: Democrat Hillary Clinton, to Republican Carly Fiorina, or even our underheard Green Party candidate Dr. Jill Stein; although I don’t think Governor Grasso would’ve been on the same side of any such neo-cons like former CEO like Fiorina, but still one has to give her respect for running against misogynist, racist types like Donald Trump.

And yes. I’d like to imagine that if Ella Grasso were alive right now; she would’ve voted for Hillary in this 2016 election via mail from her nursing home wheelchair, if she were still around.

I hope you enjoyed little my 3 cent rant on sexism and women in politics.

In the future please Just try to remember that Hillary is the not the first woman to run for office and she surely won’t be the last woman to try and run this country, but she sure is the most qualified person to run this country.

And I might even agree with those some people that have even said that Hillary should be president as she already was for a good 8-years in the 90s, although that comment would mean that she was responsible for all of Bill’s policy choices, which I do not think was the case at all as she’s always been one for whom does not ‘go along with her husband’ just to keep everyone happy.

This has been a re-edited re-posting from my IG International Women’s Day page, so please keep that and my dyslexia in mind when reading. 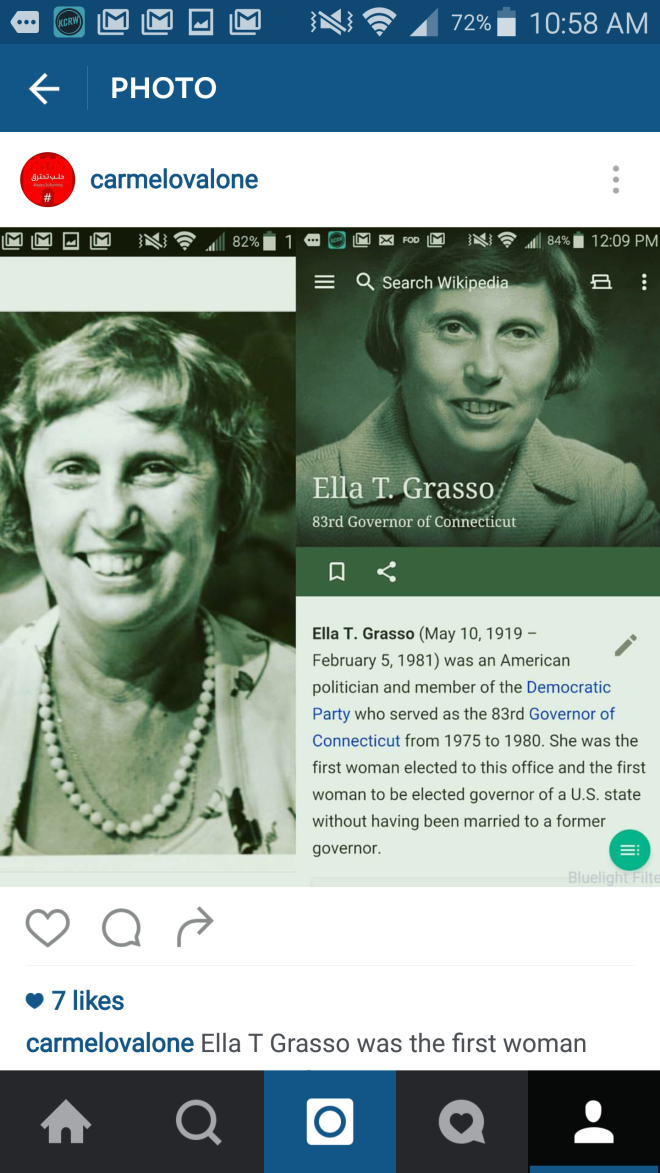